More books on the porch! 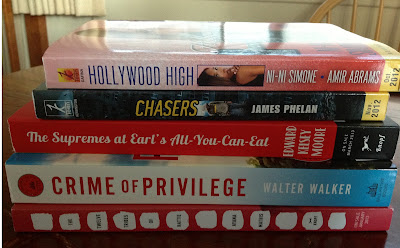 In 1923, fifteen-year-old Hattie Shepherd flees Georgia and settles in Philadelphia, hoping for a chance at a better life. Instead, she marries a man who will bring her nothing but disappointment and watches helplessly as her firstborn twins succumb to an illness a few pennies could have prevented. Hattie gives birth to nine more children whom she raises with grit and mettle and not an ounce of the tenderness they crave. She vows to prepare them for the calamitous difficulty they are sure to face in their later lives, to meet a world that will not love them, a world that will not be kind. Captured here in twelve luminous narrative threads, their lives tell the story of a mother’s monumental courage and the journey of a nation.

Years have passed since a young woman was found brutally slain at an exclusive Cape Cod golf club, and no one has ever been charged. Cornered by the victim’s father, George can’t explain why certain leads were never explored—leads that point in the direction of a single family—and he agrees to look into it.

What begins as a search through the highly stratified layers of Cape Cod society, soon has George racing from Idaho to Hawaii, Costa Rica to France to New York City. But everywhere he goes he discovers people like himself: people with more secrets than answers, people haunted by a decision years past to trade silence for protection from life’s sharp edges. George finds his friends are not necessarily still friends and a spouse can be unfaithful in more ways than one. And despite threats at every turn, he is driven to reconstruct the victim’s last hours while searching not only for a killer but for his own redemption.

The Supremes at Earl's All-You-Can Eat by Edward Kelsey Moore (Knopf hardcover, 12 March 2013).
When Odette, Clarice, and Barbara Jean meet as teenagers in the mid-sixties, the civil rights movement is moving along and so are their everyday lives. Their regular gathering place is Earl's All-You-Can-Eat diner, the first black-owned business in downtown Plainview, Indiana. Dubbed the Supremes by their friends, the inseparable trio is watched over by big-hearted Earl during their complicated high school days, and then every Sunday after church as they marry, and have children and grandchildren. Sitting at the same table for almost forty years, these best friends grow up, gossip, and face the world together with pointed humor, some sorrow, and much joy. Meet Odette, Clarice, and Barbara Jean--once you meet them, they will be your friends forever...

They’re the daughters of celebrities—the kind all the teen mags gossip about! But the It Girls of Hollywood High are about to discover that fame has a price. And no friendship—or romance—is safe….

London Phillips will diet as her mother demands. She’ll even date the billionaire her mother has chosen for her. But she won’t give up her secret hottie, Justice Banks. She and Justice plan to elope—right after he becomes a hip-hop superstar. All he has to do is seduce a media mogul’s darling daughter, Rich Montgomery, and a record deal is his! But he better remember London is really his girl…

Rich is so lucky to have a BFF like London. It was London who introduced her to dreamy Justice. Little does she know that her new heartthrob is about to cause a media explosion that will change this spoiled princess’s life forever…

Spencer Ellington hates to see a billionaire go to waste. That’s why she’s hooking up with London’s boyfriend, Anderson Ford. London may not be in love with Anderson, but she believes he’ll do anything for her. Just wait till she finds out the only thing Anderson is doing is Spencer…

Heather Cummings wants in with the It Girls to secure the spotlight for her actress mother. But when she stumbles upon a secret about the father she never knew, she discovers she has ties to the clique so scandalous it may just bring Hollywood High’s in-crowd to their knees!

Alone (Chasers #1) by James Phelan (Kensington Teen trade paperback, 30 October 2012).
When Jesse crawls out of the wreckage of a subway car and emerges into daylight, he’s greeted by a living nightmare. An unexplained force has destroyed New York City, turning skyscrapers into ash, cutting off all power and communication. Jesse and his new friends, Dave, Anna and Mini are dazed but unhurt. The other survivors are not so lucky. Every human being they encounter is infected, gripped by an unquenchable thirst that drives them to monstrous acts of violence.
Somehow, Jesse has to escape. But first, he has to stay alive.