The Unbearable Book Club for Unsinkable Girls by Julie Schumacher.

Our heroine, Adrienne Haus (who just happens to be the daughter of Jane Haus, the main character of Schumacher's first novel, The Body is Water) injured her knee just before the end of her sophomore year.  This necessitated her giving up a six-week canoe trip with her best friend, Liz.

Adrienne's mother, along with two other members of her yoga class, decided to form a summer mother-daughter reading club, in which they'd read and discuss the English 11 AP summer reading list.  The women thought it would be good for their daughters; the girls were not impressed, and took to giving the group long and ridiculous names throughout the book.  The story is supposed to be Adrienne's book report, written as a creative narrative.

Option A: argument and analysis.
Option B:  creative narrative.  For example, how have the boks you chose to read for this assignment affected you?


Lounging by the community swimming pool in New Hope, DE reading The Yellow Wallpaper, Adrienne is approached by CeeCee Christiansen.  Under normal circumstances, CeeCee would never speak to Adrienne, but along with Jill D'Amato (who works at the pool's snack bar), she is also part of the Book Club.  The fourth younger-generation member, Wallis Gray, heard about the group and asked if she could join.

Late one night, CeeCee turns up outside Adrienne's bedroom window claiming she came over because she didn't have her phone number.  She persuades Adrienne to climb out the window and go for a ride with her sister's boyfriend Jeff.  When Adrienne finally returns home, she realizes that she doesn't have her key. Not wanting to wake up her mother, she curls up on the front porch, reasoning that Jane will find her when she goes out to get the paper.

The healing process of Adrienne's knee has been greatly hampered, but this does not stop her from going with CeeCee the next time she turns up.  The two girls are very good at getting into trouble, and it's even worse when all four of them are together.

The chapter titles are 19 of the literary terms the girls have to learn (Chapter 1 is "Setting", Chapter two is "Metaphor and Simile", and so on), which provides an interesting structure for the narrative.  A considerable climax is heavily foreshadowed, and though we are teased by some smaller ones, the ultimate turning point is completely unexpected.

This is a quick, enjoyable and very absorbing story, that leaves the reader thoughtful and just a little unsettled. 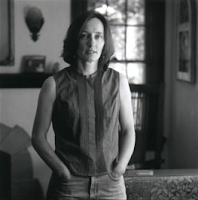 Julie Schumacher's first novel, The Body Is Water, was published by Soho Press in 1995 and was an ALA Notable Book of the Year and a finalist for the PEN/Hemingway Award and the Minnesota Book Award. It was published in translation in Germany, Norway, Sweden, Finland, Denmark, Israel, Greece, and Korea. Her other books include a short story collection, An Explanation for Chaos, and five books for younger readers: The Unbearable Book Club for Unsinkable Girls (2012), Black Box (2008), The Book of One Hundred Truths (2006), The Chain Letter (2005), and Grass Angel (2004), all from Delacorte.


FTC Full Disclosure :  I borrowed this book from my local library.