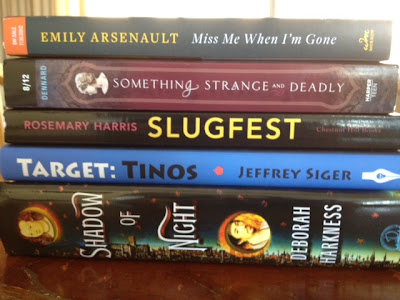 Author Gretchen Waters made a name for herself with her bestseller Tammyland—a memoir about her divorce and her admiration for country music icons Tammy Wynette, Loretta Lynn, and Dolly Parton that was praised as a "honky-tonk Eat, Pray, Love." But her writing career is cut abruptly short when she dies from a fall down a set of stone library steps. It is a tragic accident and no one suspects foul play, certainly not Gretchen's best friend from college, Jamie, who's been named the late author's literary executor.
But there's an unfinished manuscript Gretchen left behind that is much darker than Tammyland: a book ostensibly about male country musicians yet centered on a murder in Gretchen's family that haunted her childhood. In its pages, Gretchen seems to be speaking to Jamie from beyond the grave—suggesting her death was no accident . . . and that Jamie must piece together the story someone would kill to keep untold.


Something Strange and Deadly by Susan Dennard (HarperTeen hardcover, 24 July 2012).

Eleanor Fitt has a lot to worry about.
Her brother has gone missing, her family has fallen on hard times, and her mother is determined to marry her off to any rich young man who walks by. But this is nothing compared to what she's just read in the newspaper:
The Dead are rising in Philadelphia.
And then, in a frightening attack, a zombie delivers a letter to Eleanor . . . from her brother.
Whoever is controlling the Dead army has taken her brother as well. If Eleanor is going to find him, she'll have to venture into the lab of the notorious Spirit-Hunters, who protect the city from supernatural forces. But as Eleanor spends more time with the Spirit-Hunters, including the maddeningly stubborn yet handsome Daniel, the situation becomes dire. And now, not only is her reputation on the line, but her very life may hang in the balance.

Welcome to The Big Apple Flower Show where more than just the plants are dying. Paula Holliday reluctantly agrees to staff the exhibit booth for a reclusive garden sculptor at a legendary northeast flower show and she expects a quiet weekend sharing garden tips. She doesn't expect to be knee-deep in jealousy, rivalry, horticultural sabotage, beheaded gnomes and something the loose communityof gardeners has started referring to as the Javits Curse!
The mishaps start out small but the uneasiness intensifies when an overeager attendee is found floating in the river and Paula realizes she accidentally holds the clue to his identity and the reason for his murder. And so does the killer. That's when the garden gloves come off and this flower show turns into a real Slugfest!

In an isolated olive grove on the idyllic Aegean island of Tinos, revered by pilgrims around the world as the Lourdes of Greece, the remains of two bodies charred beyond recognition are discovered chained together amid bits and pieces of an incinerated Greek flag.  An enraged press screams out for justice for the unknown victims, until the dead are identified as gypsies and the story simply falls off the face of the earth.
Is it a gypsy clan war, a hate crime, or something else?  With no one seeming to care, the government has no interest in resurrecting unwanted media attention by a search for answers to such ethnically charged questions and orders the investigation closed.
But Andreas Kaldis, feared head of Greece’s special crimes division, has other plans.  He presses on in his inimitable, impolitic style to unravel a mystery that yields more dead, a modern secret society rooted in two-hundred-year-old ways, and a nagging suspicion that his answers lay in the sudden influx of non-Greeks and gypsies to Tinos.

In A Discovery of Witches, Diana Bishop, Oxford scholar and reluctant witch, and the handsome geneticist and vampire Matthew Clairmont; together they found themselves at the center of a supernatural battle over an enchanted manuscript known as Ashmole 782.
Now the two are plunged into Elizabethan London, a world of spies, subterfuge, and a coterie of Matthew’s old friends, the mysterious School of Night that includes Christopher Marlowe and Walter Raleigh. Here, Diana must locate a witch to tutor her in magic, Matthew is forced to confront a past he thought he had put to rest, and the mystery of Ashmole 782 deepens.