Nothing But the Truth

The Other Woman by Hank Philippi Ryan (Forge hardcover, 4 September 2012).

"Jane Ryland had thrown up after the verdict."

That verdict had cost her her job, and some of her dignity, but not her integrity.

She'd been going places as a television news reporter, until she was asked to reveal a source and refused.  But integrity didn't pay the bills, and after a few weeks of feeling sorry for herself, she'd accepted a job with the Boston Register, vowing to scoop her former employer. 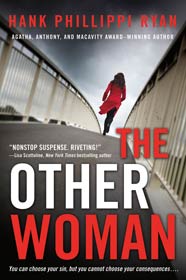 Her first assignment was to interview Moira Lassiter, wife of a senate candidate and former governor.  Mrs. Lassiter seemed to have disappeared from view, and her staff was stonewalling attempts to talk to her.

Meanwhile, Jane's friend Jake Brogan, a homicide detective, was dealing with what appeared to be a series of murders near bridges around Boston.  After only two deaths, the media was already attributing them to the "Bridge Killer",  although Jake's instincts tell him they're not related.

When they meet tracking down a witness, Jane and Jake discover that their assignments are related and begin to compare notes.  It's difficult to provide more plot details without spoilers, but be warned that you won't be able to read "just one more chapter".  Don't start this book at bedtime!

Emmy-winning investigative reporter Ryan knows the news business firsthand, and writes about it with expertise.  Of course her skill as a suspense author (for which she's also won a number of awards) helps a great deal, as does her ability to create believable, multi-dimensional characters.

The attraction between reporter and detective creates a problem for someone who's trying to protect her professional integrity.  Although Jake understands this, he does realize the potential for a great relationship, and attempts to convince Jane that it's possible to pursue it without compromising that integrity.

This is just a great, well-told story that you won't want to put down.  Don't start it at bedtime.

Please visit Crime Fiction Collective, where Ms. Ryan is guest-blogging today.  Also, if you leave a comment over there, you'll be entered to win a first edition of The Other Woman.